Enquire about an expert >

Oil and Gas Pricing Trends and the Potential for Disputes

As we are all painfully aware, there has been a marked increase in oil and gas prices during recent months. North European gas was trading at $2/MMBtu in mid-2020 but is currently trading at $40/MMBtu after peaking at $100/MMBtu earlier this year. Similarly, crude oil prices reached over $120/bbl earlier this year, up from approximately $50/bbl at the start of 2021, although they have recently dropped back below $90/bbl.

The impacts of high energy prices are diverse. Due to varying pricing methodologies and different contractual terms, not all oil and gas prices will respond equally to changes in market conditions. Within this discussion piece we consider some specific examples of how oil and gas price movements could lead to increased legal disputes within the energy sector.

High crude oil prices are generally good news for producers of crude oil. However, when selling cargoes recently, some producers have found themselves realising prices below what they regard as a “fair” price, due to widening differences between benchmark rates.

The vast majority of crude oils – colloquially called “crudes” – worldwide are priced with reference to a relatively small handful of benchmark crudes. These serve as indicators of global prices as they are well known, traded in high volumes and have transparent pricing. West Texas Intermediate (WTI) is often used as a benchmark in the Americas; Dated Brent is widely used in Europe, the Middle East and Asia; and Dubai/Oman is an important benchmark often used for Middle Eastern exports to the Far East. Urals (a Russian crude oil), while not considered a benchmark crude, has been an important reference for years especially for sourer crudes i.e. those with a high sulphur content.

The graph below shows the price evolution of four key crude oil prices from 2021 through 2022. The crudes described similar pricing trends through 2021 (the offset between them reflects factors such as different qualities and loading locations) and then shifted dramatically in early 2022. As seen below, the benchmark spreads widened in respect of each other, particularly for Urals, which saw its markets curtailed dramatically following the Russian invasion of Ukraine. 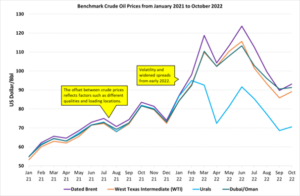 When any crude oil is sold worldwide it is almost always priced at a premium or discount to one of these benchmark crudes. This means that any distortions in benchmark prices will have a knock-on impact on all the contracts using that benchmark as a reference price.

Urals: As the graph above indicates, Urals is now completely dislocated from the other benchmark crudes. Middle Eastern producers, including Saudi Aramco, generally observe the price of Urals closely and would consider pricing trends in Urals when setting their official selling prices. It is almost certain that, with the isolation of Urals from international markets, it is no longer used in that way. An alternative, the European Sour Crude Index published by Platts, was launched earlier this year and it remains to be seen how it will be used.

WTI vs Dated Brent: Meanwhile the Dated Brent-WTI spread has increased versus historical norms. This is linked to recent changes in trading patterns, specifically Europe’s efforts to replace Russian crude oil. To keep European produced crude oil within the region (rather than exporting it to Asia), we have seen Dated Brent prices increase relative to WTI (in the US) and relative to Dubai/Oman. This has created a market where it is often more profitable to trade within Europe, rather than export it. The Dated Brent price is also, at the moment, high enough to attract US crude oil to Europe.

There are clear reasons for the higher than usual spread. However, it remains to be seen if those utilising WTI as a benchmark, and receiving lower prices as a result, will push to renegotiate for an alternative benchmark. Indeed, for some in the industry WTI’s robustness is still in question following the divergence seen in late 2010/early 2011 when a bottleneck in the North American pipelines system led to a significant drop in WTI prices relative to Dated Brent.

Dated Brent: Whilst Dated Brent currently trades at a premium to WTI, the North Sea benchmark is not without its challenges. Owing to a continual decline in production volumes in most North Sea oil fields in recent years, the physical availability of the cargoes that make up Dated Brent is relatively low. When physical volumes of a benchmark crude fall, so does its traded liquidity. This means that single trades can have a bigger, marked impact on pricing and producers have disproportionate influence over prices (and hence, over the price of many other crudes). This potentially impacts the validity of Dated Brent as a benchmark.

The price reporting agency Platts is currently in a consultation period with the industry regarding plans to shore up the Dated Brent benchmark. Whilst details are still being thrashed out, it appears likely that WTI cargoes will be included in the Dated Brent assessment from early next year. Efforts to incorporate a remotely produced crude oil such as WTI will no doubt be complex, a key issue being how shipping costs are calculated and incorporated into the assessment.

Platts has successfully managed changes to the assessment in the past (bringing in additional North Sea crude oil i.e., local production), though the magnitude of change is far more substantial this time. Whilst Platts will almost certainly steady the ship, crude oil traders and sellers face increasingly significant ramifications in the selection of benchmarks for their crude oil sales.

It is the divergence in benchmarks combined with concerns about their robustness rather than the actual high prices of crude oil that is causing most consternation in the industry. Whilst it is not yet clear how the market will react; renegotiations of term contracts look likely. If the contractual parties are far apart in their perceptions of value, legal disputes are likely to follow.

Whilst crude oils are priced relative to benchmarks, gas pricing is more complex. Trading on the gas spot markets reflects the current tight spreads due to supply-demand balance. However, many long- term gas contracts (particularly those for LNG) have price formulae in them that will not reflect the current market conditions fully.

LNG contracts of 20-year duration are not unusual. The price clauses within these contracts typically include a base price and a means by which that price is adjusted over the duration of the contract, known as an escalation factor. This escalation factor may incorporate oil/oil product prices, gas prices at hubs or potentially both. Typical escalation factor calculations temper the impact of extreme movements in prices for both buyers and sellers. However, during a 20-year contract, we have seen first-hand that what was deemed an extreme price at contract negotiations can become a fairly everyday price during the contract.

Most LNG contracts now incorporate a price reopener and/or fairness clause to open the way for renegotiation of contract prices. It is highly likely that with the current movements in oil and gas prices we will see buyers and sellers (although perhaps more frequently sellers) triggering the price review clauses and seeking a renegotiation. Renegotiations often happen without formal arbitration. However, given the sharp rise in prices, the expectations of producers and consumers are not going to be easily bridged and are therefore likely to require legal input.

High energy prices have wide ranging impacts. Across the oil and gas industry, high and volatile prices impact decision-making from producers to traders to consumers. Whilst some prices within the industry, such as those for spot LNG cargoes, are at record breaking levels others, such as LNG prices within long-term contracts, are sheltered (and effectively disconnected) from the extreme movements seen recently.

Over the next few months, we would expect to see crude oil and LNG players triggering price reviews within their contracts, alongside other efforts to renegotiate prices. There may also be oil pricing disputes resulting from pricing volatility and the behaviours of pricing benchmarks.

It would be overly simplistic to say that high energy prices lead inexorably to increased legal disputes in the industry. However, rising prices certainly increase the economic consequences of disputes, whilst also providing an environment where companies will take on new risks, whether these be geographical, political, technical, or procedural to develop new opportunities. Against the background of increased volatility and the widening of price spread, it would not be surprising to witness an increased level of legal disputes in the sector.

Sign up to our newsletter. By subscribing we will be holding the information you provide to send you occasional Newsletters. You can unsubscribe at any point via the link in the newsletter or by contacting us at any time.